In these times—and all times—daily living is a radical act of resistance if you happen to exist in the world as a suspicious boy, fag and sissy, threat, as a Black man. The only demise that we should now desire is that of the racist imaginary that has and continues to construct and constrict us.

Because in fact we are not noble. We are cowards, hypocrites. Hysterical in our hatred and ignorance, seeking to cast aspersions and impose ostracism via state and social persecution—death sentences—upon those we consider already damned.

How does it feel to be a problem?

As a society, our language is imbued with meaning. The words black gay man together carry so much weight and have the power to conjure strong, often mythical, ideas. These myths permeate the popular imagination to such an extent that they yield to societal constructions of what it means to be black, queer and male.

Darnell L. Moore in “Black Manhood and the Racist Imagination: On Trayvon Martin and the two Un-named Black Men Attacked in Texas,” writes on this imagination, correlating how Trayvon Martin and two perceived queer, unnamed black men fall victim to a perpetrator’s gaze for having problem, “suspicious bodies.”

These portraits are the product of a collaboration with black queer men to whom I posed a single question: What do you think people think of you as a black queer man?

Employing a device popularized by British photographer Gillian Wearing, I thus tasked these men to write their responses on large blank placards and photograph holding them.

My goal is to challenge and deconstruct the myths surrounding black masculinity, black sexuality and blackness. 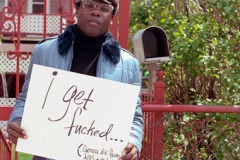 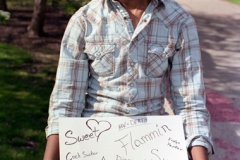 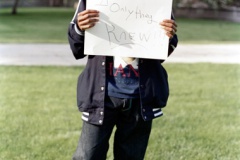 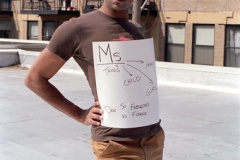 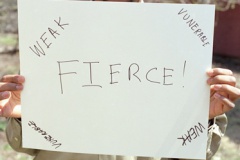 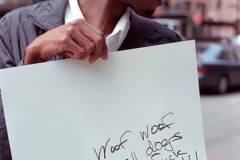 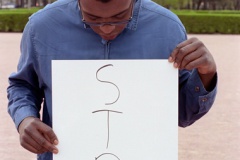 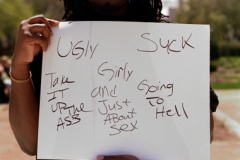 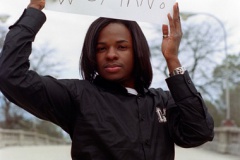